This picture does not give you
a good sense off the show.
for a better one, go here 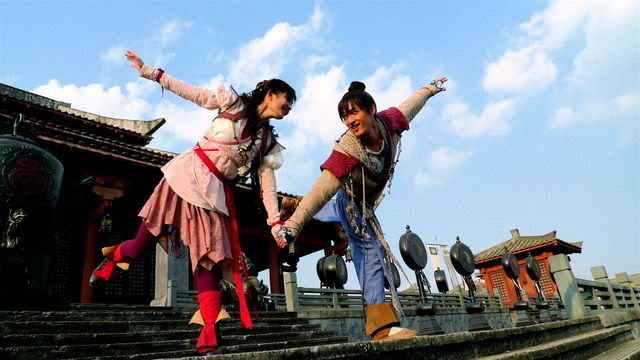 While there are a few things I would have changed in Episodes 36 and 37, it remained up to it’s extraordinary level of entertainment right from Episode 1 straight through Episode 37-ten minute from the end. The last ten minutes were A. totally dumb, B. made no sense in the magic system, C. made not sense in the inter series plot-line.

So, I recommend watching the show and turning it off just a little after the snow begins. Before the main two characters start talking again. Then, you get the best of both without the dumb, tacked-on, pointless, sad ending. (Unless it’s a set up for a sequel, which would be okay. Otherwise, I don’t get how they can imply that a character is about to die who is needed to live and do something for the continuity of the other series that is set later.)

This is the most amazing show/series/movie/book/etc. I’ve come upon in years. Time after time after time, they just did everything right. The characters were deep and engaging, the plot intriguing, the magic nifty and cool, the stories happy or heart-breaking…and it was not gross, or violent, or unpleasant almost all the way through. (The zombies in the first four episodes are a bit yuck, and there is one plot line in the last three shows that I found very disturbing and hard to watch (both horrible and sad) but other than that, it just didn’t need to indulge in exces violence, like nearly everything else does now days.)

The weirdest and funniest part to me, however, is how many people I got wrong in the closing credits. We watched this quite a few times in China and many times since we got home, and nearly everyone I first thought was someone else or had a wrong opinion about what the scene meant….right from the very first images–who turned out not to be the character I first thought it was…up until the last twenty minutes, where I discovered I’d made a mistake about yet another character in the closing credits.  Still, it was both beautiful and fitting for the story.

Here it is: Chinese Paladin Three Ending Credits. (Really, really beautiful song, too. The music was absolutely excellent in this series.)