2012 was an intriguing year for us with many blessings and a few setbacks.

The highlight of the year—perhaps of the decade—for me was a trip to China with Ping-Ping for Chinese New Year last January. Words cannot express the wonder or the magic of this trip—two and a half weeks in a magical land where I was an unaware stranger, and my daughter was a princess.

For more on this wondrous journey, you can read the blog entries I wrote while I was there—if you have not seen them already. To my amazement and delight, quite a few people have read these and seemed to enjoy them. If you have seen them before, there are more pictures now. (If you read them when I was in China, you probably haven’t seen any of the pictures. ;-)

John and the boys soldiered on at home—with help from Grandma and Uncle Bill. To our amazement, when we returned, all was well.

Writing-wise, there have been ups and downs. Both John and I had manuscripts we hoped to sell in 2012 that did not sell. John turned in The Judge of Ages—Book Three of the Count To A Trillion series. He is hard at work on Book Four, which I think is called The Concubine Vector. Meanwhile, I am hard at work on The Raven, The Elf, and Rachel--Book Two of The Unexpected Enlightenment of Rachel Griffin—a kind of Harry Potter for girls with magic, danger, and angsty romance.

Car repairs this summer kept us from our yearly trip to Chincoteague. The princess was delighted. She doesn't like roughing it away from the computers. The boys were crushed. I really missed it, too.

The most amazing thing that has happened in the latter part of 2012 is that I suddenly cleaned the house. If you were avoiding visiting because you hesitated to enter one of the Malebolge of Hell, fear no longer. The place is clean and relatively tidy. Come on by! The House before the cleaning.

John had a new book come out in December. The Hermetic Millennium, sequel to Count to A Trillion. We came upon it in the bookstore before Christmas. John held it up and announced that the customers should buy it. The only customers present were small boys, who fled. But behind us was a lady who did not run. Turns out she was a Conservative Roman Catholic who had been praying to know which science fiction book to buy for her son. She and John had a wonderful conversation. (She bought an autographed copy of Count To A Trillion.) 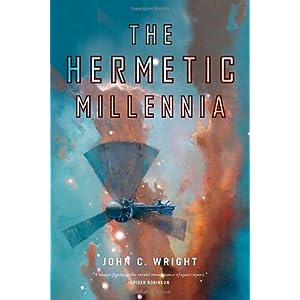 I did a lot of traveling this year—China, Georgia, Goshen Scout Camp. When not traveling, I worked on my Rachel Griffin novels and on the related games—either playing in the game the book is based on, run by our friend Mark Whipple, or running games to work out the kinks in my Roanoke Academy/World of the Wise background with Virginia Johnson, Erin Furby, and more recently Bill Burns. John and the boys occasionally help out, too. My latest achievement has been a map of the Floating Island of Roanoke.

Recently, I had a conversation with my daughter about the kind of stories she likes: stories where people like detectives or doctors help people. She doesn’t like love stories that are sad. But she loves mysteries and stories with love that are funny and have magic. And I thought: Ah, and that is exactly what I want to write!

The children are flourishing:

Ping-Ping had a wonderful time on her China trip, where she was feted as the Princess for two and a half weeks. I feared she would be sad when she came home. Not only had she been looking forward to this trip for two years, but Ling Shan, her friend with whom she had been spending all her time, was gone. However, other than a few ‘no one to eat with at lunch’s, she seemed as calm and focused as always.

She thought she had a summer job lined up…but it turned out to be unwise. She could not find anything else, so she mainly slept, watched Chinese TV on the computer, and made paper flowers with chocolate in the center for the summer. We did have two nice visits with old friends. One with her two girlfriends Ming and Li Ming at Longwood Gardens in Pennsylvania, which was lovely, and another with her ‘Little Brother’ who has been adopted by a family in Georgia and is now Joe Hedden. The Princess and her friend, the Incomparable YiYi, in China

Orville is now as tall as a sequoia. Or at least, he is inching up on John (who is as tall as two sequoias.) He is in eighth grade and is doing quite well. He earned First Class in his Boy Scout Troop, which made him one of the very few members qualified to be a Patrol Leader, so he is now the leader of a patrol called the Bison.

Orville’s favorite activity is to watch Let’s Plays on YouTube…this is other people playing video games and making funny comments about them. He seldom actually wants to play a game, but he is very interested in hearing about them. He also loves reviews of old toys—also done in a wisecracking fashion, and Japanese Anime. Recently, we’ve set up a system where he needs to earn points to watch on the computer. It is amazing how many chores are suddenly getting done. The Cherubim is now as tall as I am and has the beginnings of a mustache. He graduated from Sixth Grade in the spring. He was supposed to dress up, but he had outgrown all his nice clothes. So, he graduated in his blue Superman shirt and blue shorts.

He had the most interesting summer of all the kids. He loved his first year at Goshen Boy Scout Camp, where he participated in the New Scout program. He went to Summer School. He went to Georgia with Ping-Ping and I to visit Ping-Ping’s “little brother” from China, who has been adopted by a wonderful family, and he went on a Boy Scout overnight.

The fall has been hard, though. After seven years at Bull Run Elementary, he moved onto middle school. He has not been as happy there, though he is with some of his friends and seems to have an excellent teacher. Justinian has had a phenomenal year. This is his second year at Bull Run Elementary School, where he is simultaneously in Special Ed and the Gifted and Talented program. These classes are much more interesting to him than his old classes and he even admitted to enjoying school a bit. A huge step forward.

Juss spent two years working to control his temper to earn a DS. Finally, this Christmas, he achieved his goal! He is now the proud owner of a 3DS. This is the first time we have ever bought him a game that is actually at his level. The Pokemon DS game actually keeps his interest and seldom causes him to scream in frustration. A joy for everyone.

The first Pokemon videos arrived in our house when Orville was 3. He is now 14, and this is the first time we’ve owned a Pokemon game. I was amused to discover that something in the cartoon that I had been wondering about for eleven years is a direct tribute to something in the game.

Juss has been active in Cub Scouts. He won second place in the Creative Design section of his Pack’s Bake Off – with the Mario Mega Mushroom Cake you see below: